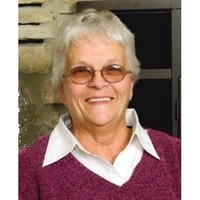 Graveside services for Winona Kay Wolfe will be held at the Tipton Municipal Cemetery at 10:00 a.m., Tuesday, November 24, with Rev. Al Mixon, pastor of the Church of Nazarene in Dodson, Texas, officiating.

Burial is under the direction of Orr Gray Gish and Tipton Funeral Homes.

Winona was born December 30, 1939 in Imperial, Nebraska to the late Charles Ball, Sr. and Georgia (Beattie) Ball.  She passed from this earth on November 22, 2020 at her home in Hollis, OK.

She lived mostly in southwest Nebraska before packing up her five children and moving to Tipton, OK in 1967.  It was there that she met the love of her life, Jody Wolfe.  They married on December 19, 1970 and welcomed a sixth child, Mike, to the family in 1972.

After raising their family in Tipton, they moved to Hollis, OK in about 2001.  There Winona established a daycare in her home helping to raise many local children over the ensuing years.  All of the children lovingly called her NoNo and still do today.  It was never clear if that was because they could not pronounce Winona or if it was because she was always telling them “no no!”.

Family always came first for her.  Nothing gave her greater joy than getting as many as possible of her very large family together for Mother’s Day.  She would spend days planning and cooking way too much food, then just sit back and smile watching her family try to eat it all.

She was a fiercely independent woman who was always willing to help anyone in need, but never wanting to ask for help for herself.  More than once when she needed assistance in the middle of the night, she refused to call anyone, not even 911, until morning because she didn’t want to disturb anyone.

She was preceded in death by her husband, Jody, her parents, one son, Jerry David, one sister, Dorothy (Ball) Koehn, her brother, Charles Ball, Jr., two granddaughters, and one great-granddaughter.

She is survived by her three daughters, Sharon James and husband, Darrell; Terri Timmons and husband, Tim; and Lori Horton and husband, Kelly; all of Hollis; and two sons, Garry David and wife, Haven; and Mike Wolfe  and wife, Jennifer; both of Vernon, TX; one sister, Carol (Ball) Barnes; and a whole bunch of grandkids, great-grandkids, two great-great-grandchildren, numerous nieces, nephews, in-laws, and probably a few out-laws.

To order memorial trees or send flowers to the family in memory of Winona Kay Wolfe, please visit our flower store.