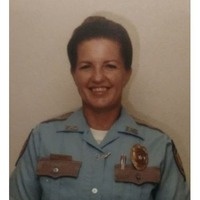 Naomi was born Vivan Naomi Ruth Moreland on January 22, 1941, in Kiowa, Pittsburg County, Oklahoma. She was the third daughter to Fern Newman Moreland and the 4th child for Ruby Lee Cook Hart Moreland Lovell.  Her father gave her the nickname "Tommy".

Naomi grew up all over, receiving her education in Oklahoma, England, New Mexico and Texas.  She was a veracious reader starting at a young age well up into adulthood. While in high school, even though she was small in stature, she played basket ball. During her senior year of high school, Naomi was a member of the Senior Girl's Powder Puff football team playing against the Junior Girls. No one remembers who won, but she had fun along with her soon to be sister-in-law, Faye Hodgkins Story and cousins Pasty Williams and June Barbe. She graduated from Valley View High School in 1959.

On June 7, 1959, in the First Baptist Church of Kamay, Texas, she married Jack Wayne Hodkgins, son of Al and Freda Tucker Hodgkins.  They lived, farmed and ranched in and around Wichita County, Texas and near Lubbock, Texas, after their wedding. In 1964, the family moved to Altus, Oklahoma, where Jack took a job with Standard Home Shopping Service.  To this marriage three children were born.  In 1969, the family moved to Lawton, Oklahoma, where Naomi and Jack divorced in February of 1970.

In the summer of 1970, Naomi and her children moved back to Altus.  The following seven years she progressed toward her dream to become a police officer. She worked 40 hours a week as a bookkeeper and put herself through college all while rearing three active children.  Naomi attended Western Oklahoma State College where she earned an Associates Degree in Police Science, with a minor in Sociology.  In March of 1975, she ran as a Democrat for the Ward 4 Altus Town Council post.  Even though she did not win the seat, she gained invaluable experience in politics and public service.  While living in Altus, Naomi became the first female Webelos leader as there were no men willing to step up to the position.

Naomi applied to and was hired by the town of Frederick Police Department in August of 1977.  She served from 1977 to 1986.  During her time at the Frederick Police Department she was Vice President for two years and President of the Fraternal Order of Police Lodge 167 and was instrumental in getting a monument erected honoring fallen law officers in Tillman County, Oklahoma.  She was a founding member of the Tillman County Rescue and Recovery Team.  Naomi initiated the Neighborhood Watch Program, helped State Crime Lab establish uniform rape report and kit for the town hospital.  She was always ready to learn and better herself.  As a police officer, she took continuing education classes in law enforcement to learn the newest crime fighting and investigation techniques.  Naomi was proud of her service to the town of Frederick.

When Naomi left the Frederick Police Department, she went back to school at Cameron University in Lawton, Oklahoma, graduating May 1991, with a Bachelor of Arts in Communications.  After graduation, she worked at various jobs. She worked for several years as security for United Regional Health Care System in Wichita Falls, Texas. In 2008 she went to work as a Correctional Officer for James V. Allred Penitentiary, one of the largest maximum security units in Texas. It is located in Iowa Park, Texas.

During the course of Naomi's life, she participated and held positions in various church, community and civic clubs where she won numerous awards and recognition.  She was a charter member of the Tillman County Rod and Gun Club.  Naomi gave her children an education in service to church, family, neighbors, friends and community.  Some of her hobbies included cake decorating, water sports, western horsemanship, coaching Little Leaguers, reading, gardening, dancing (which she loved), hunting, and camping.  She taught her children the love of literature, music, dancing, theater and the arts as well as how to hunt, fish, camp and be self reliant.  The family would go camping, repelling, hiking and exploring the area around them.  They could also be found dancing around the living room as the children grew up.  She was the biggest cheer leader and encourager in all that her children and grandchildren did.  You would find her defending family, friends and sometimes even strangers against those who would try to oppress them.

To order memorial trees or send flowers to the family in memory of Vivan "Naomi" Ruth Hodgkins, please visit our flower store.

Memorial Service to be held at a later time.