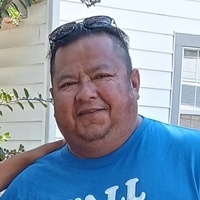 Rosary will be held at 7 p.m. Thursday evening at the funeral home.

He was born December 18, 1974, in Clinton, Oklahoma, to Juan and Ramona Chavez (Zuniga) Ibarra. He grew up in Frederick and attended Frederick schools. He was united in marriage to Rosalinda Martinez on February 28, 2009, in Frederick. His work history includes: Metzeler (BTR), Cassidy Grain and also as operator and truck driver for the Atlas Concrete Plant. He enjoyed working on and riding his motorcycle with his son Jimmy, his friends and spending time with the Bandito Club. If you were blessed enough to have met Roberto, he had an infectious smile and a heart of gold. If anyone needed anything, he was the first one there. He was a wonderful, great, and blessed man. He loved spending time with his family. He also loved listening to music and playing music.

He was preceded in death by his maternal grandmother: Emma Zuniga; his paternal grandparents: Santiago and Abrana Ibarra; and a brother-in-law: Jorge Jose Martinez; maternal aunt: Loretta Gaytan.

To order memorial trees or send flowers to the family in memory of Roberto Ibarra, please visit our flower store.