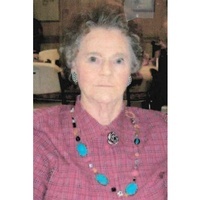 Mrs. Miller passed away on Monday morning, May 20, 2019, at Family Care Center in Kingston, Oklahoma. Burial is under the direction of Orr Gray Gish Funeral Home of Frederick.

The family will receive friends from 6 to 7 p.m. Thursday at the funeral home.

She was born March 21, 1933, in Midland, Texas, to George and Velma Marie (Bowerman) Rushin. She lived in Texas until the age of five when her family moved to Oklahoma in 1938. She was united in marriage to Jimmie T. Miller on June 28, 1942, at Vernon, Texas. Melva loved playing cards with her grandchildren. She was especially known for her rummy skills. She spent time fishing at Blue River, always with grandchildren alongside her. She was a terrific cook and often prepared delicious meals for family gatherings. She enjoyed sewing and made many beautiful quilts for loved ones. In order for her grandchildren to be together, Melva frequently planned long road trips that included snacks for the road, singing silly songs and sometimes driving lessons. She didn’t have much but she always made her grandchildren feel like they had everything.

To order memorial trees or send flowers to the family in memory of Melva D. Miller, please visit our flower store.