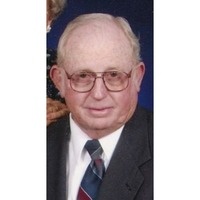 Mr. Hazel passed away Friday, February 5, 2021 at a nursing rehab facility near Fort Worth, Texas. Burial will be in the Frederick Memorial Cemetery under the direction of Orr Gray Gish Funeral Home.

A family and friends reception will be held from 5:00 p.m. to 7:00 p.m. Tuesday evening at the funeral home.

He was born on December 15, 1933 in Frederick, Oklahoma to Ernest Lee and Nettie Mae (Smith) Hazel. The Hazel family were early settlers to southwest Oklahoma. Frederick was formed from two communities in 1902, one was Gosnell and the other was Hazel.

Lowell attended Tipton schools and graduated from Tipton High School in May 1953. He entered the United States Navy and served aboard the USS Quapaw from March 1956 to August 1957. He was honorably discharged March 1962.  He was united in marriage to Helen Jane Jensen on April 27, 1957 at the First Baptist Church of Manitou. After his military service, Lowell and Helen settled in Frederick and began farming. Farming was in Lowell’s blood. He was raised on a farm and tended to milk cows and sheep. At the age of 7, his dad put him on a tractor plowing and he was hooked. Lowell was a custom harvester and he and Helen, along with their children would go on harvest every year. From Oklahoma to North Dakota and all across the country they traveled, sending the kids home ahead to stay with their grandparents when school started each year.

Lowell was a faithful dedicated member of the First Baptist Church of Frederick for many years. He served on various committees and positions of leadership and even served as the mechanic for the church vans and buses through the years.  Lowell also had served on the Tillman County EMS Ambulance Board, receiving a plaque for his many years of faithful service.

He had a passion for God’s land and for the Lord as well.   Lowell knew Jesus Christ as his personal Savior and his earthly passing is celebration in Paradise now; he believed God wanted him to always show love and kindness to his fellow man and often went out of his way to do so.

Memorial contributions may be made to the First Baptist Church, 201 E. Grand, Frederick, OK 73542, in loving memory of Lowell Hazel.

An online guestbook and sympathy cards are available at:

To order memorial trees or send flowers to the family in memory of Lowell Hazel, please visit our flower store.