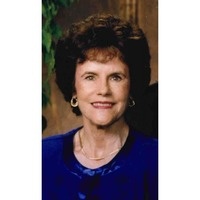 Glenna was born October 1, 1932, in Grandfield, Oklahoma, to Adelora D. and Mabel (Cyr) Nault. She grew up in Grandfield and attended Grandfield schools where she was the homecoming queen. After graduating high school, she was united in marriage to Bobby Frank “Bob” Bobo on September 24, 1950, in Grandfield.  She was a loving wife and mother to three children. She worked for White’s Auto, Goodyear and at the Tillman County Courthouse for the District Attorney’s office.  Glenna was very proud to serve as the Law Librarian at the courthouse for many years, even after retirement and she was a faithful supporter of Bob in his community activities. She was a member of First Baptist Church of Frederick.

She was preceded in death by her husband: Bob, on November 18, 2015; a sister: Marcelle; and three brothers: Ralph, Jack and Kenneth.

Memorial contributions may be sent to the First Baptist Church, 201 E. Grand, Frederick, OK 73542, in loving memory of Glenna Bobo.

To order memorial trees or send flowers to the family in memory of Glenna Delores Bobo, please visit our flower store.