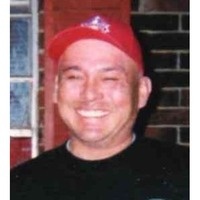 Visitation will be held at 6:00 p.m. Friday evening at the funeral home.

Burial will be in the Frederick Memorial Cemetery.

He was born December 31, 1963, at Lawton, Oklahoma, to Jefferson Gardener and Lorancie (LeFlore) Hicks. He grew up in Frederick and attended Frederick primary schools and graduated high school from Jones Academy in Hartshorne, Oklahoma. He was united in marriage to Gloria Zuniga on August 20, 2012. His passion was his work: gardening, landscaping and carpentry. He was an avid Oklahoma University Sooners fan and was devoted to all OU sports. He particular enjoyed playing softball and played on various teams including the “Warriors”. He loved to barbecue, grill and spend time with his family and friends.

He was preceded in death by his parents; a grandson: Andrew Watkins; a brother: Joe Ray Hicks and four sisters: Pearlene Osborn, Louella Ann Fobb, JoElla Saenz and Vera Hudson; and a nephew Ted Hicks.

Survivors include his wife: Gloria Zuniga Hicks, of the home; a son: Ian Watkins, of Lawton; and two grandchildren: Kaiden Joel Watkins and Heaven Angelita Watkins.

Memorial donations may be made at the funeral home in loving memory of Eddie Joel Hicks.

To order memorial trees or send flowers to the family in memory of Eddie Joel Hicks, please visit our flower store.